Ten days ago I wrote about an event that I had just been invited to in the Alps – the ASICS Beat the Sun challenge. The idea is simple – can a team of runners, in a relay, circumnavigate the Mont Blanc between sunrise and sunset on the longest day of the year?

Last year there were two elite teams of athletes trying to succeed in this seemingly possible, but extremely challenging task. One team made it (just) and the other team didn’t, but the narrowest of margins.

A year on and the idea had developed, so that now there would be five team, each representing a region: Southern Europe, Northern Europe, the Americas, Africa and Asia Pacific. And in each team there would be three pros and three amateurs, each running a couple of legs.

The mountains played their part perfectly. The weather was just right, there ws enough snow on the high passes to make for some epic legs and the views were simply spectacular.

The teams themselves all seemed to bond and there was as much love between the teams as there was rivalries.

The guests – me included – were treated to a really fantastic weekend where we had the chance to try out some of the current ASICS trail ‘Fuji’ range, run on the trails and follow the event as it unfolded. 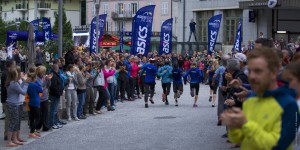 Well one thing that is for certain is that a Hollywood script writer would have struggled to fit in as many twists and turns as reality managed. Thanks to the tracking technology that for the most part worked perfectly, we (and the rest of the world) could track the runners online as they moved along the trails. And it seemed that as each teams stronger runners came into play the lead was swapping continuously.

Just one example was what happened to the race in Italy. As all the gathered guests waited in Courmayeur for the race to come through and the runners hand over the GPS baton, we understood that one of the Northern Europe runners had got lost. His team – led by the fantastic Holly Rush – was now in last place, well adrift from the other four teams and miles behind the sun. They were out of the race.

But suddenly the spare runner was being readied. Who was injured? What was going on? He sped off in a car and we watched the Americas, Asia Pacific and Africa runners come in, hand over the baton and send their team mates on their way. News arrived that Southern Europe – one of the strongest teams – has stopped. It was their runner, the amateur Virginia Nanni (who I must say I thought looked a bit too glamourous to be taken seriously as a trail runner!) who needed help. In the end, she had stopped because she had a stitch, but that is by-the-by. The question was, would Northern Europe suddenly be back in the race?

Nanni’s replacement came in to Courmayeur and their next leg runner, Xavier Chevrier, shot off like a man possessed. Leaving Lukas Naegele, from team Northern Europe, waiting like a jilted bride. And he waited. And waited. And waited.

Actually, that was dramatic and slightly heart breaking. Lukas is a fierce competitor and to see him have to hang around while the other runners disappeared off up the mountain, was terrible. Of course, like the true competitor that he is, when he got the GPS unit he went off like a rocket. But it all felt a bit pointless for the team who I thought had one of the best chances.

Once again the whole event has been captured by Sunset + Vine and there will be a film out soon. In the mean time I can say that Team Americas won the race and beat the sun, as did Southern Europe. Team Northern Europe battled hard but were a very distant fifth. While Asia Pacific and Africa raced every step of the way. There were wonderful moments of camaraderie. There was drama. And there was lots of champagne celebrations.

If you want a sneak preview, here is a first edit of the film. Personally I think this is a great challenge and I can’t wait to see what ASICS comes up with for the 2016 edition. My only request… make sure Iaza is there!