Recently I was talking about the words of the Lord’s Prayer – something that I don’t think about all that often, but having sung the words every morning at chapel in school from the age of 11 to 18, I had no problem recalling them.

In the prayer there is a line

thy will be done on Earth as it is in Heaven

This line popped into my head today as I was on a group ride – my second such morning in the last week – as I considered the spirit of cycling versus running.

Back on the bike 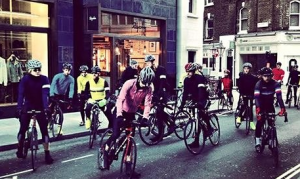 It’s been many, many years since I have been on a bike for fun. A while ago I dabbled in triathlons and I used to ride to get fit for them. But I was always more into the running and to be honest I have always been very nervous about cycling. Or more accurately, nervous about falling off a bike, at high speed, whilst wearing thin Lycra kit.

But since the London marathon three years ago, my focus has moved away from racing marathons. I have run some trail ultras and loved them, but I didn’t have the drive and motivation to train intensively for them. So I have lost my way. In the last few months, however, I have really started embracing variety. I’ve been running, certainly, but I have also been hitting the gym. And trying yoga.

Then last Sunday I joined a local group of cyclists for a group ride. It was very friendly and we waited for the group to come back together several times. We managed 43 miles in a little over three hours. Then a friend, Ben, suggested that he would organise a ride for today – Good Friday – out to Essex, followed by a couple of hours at the Olympic velodrome, watching a track race meet. I was super excited about this, not least because I knew the riders today would be of a higher standard and the planned route was longer than last Sunday.

Despite my enthusiasm, though, my concerns about cycling remain firmly in place. A faster, longer ride with better cyclists would only serve to increase the chances that I would either hit the wall (or bonk in cycling parlance), get dropped by the group, crash… or all three.

So if cycling is so scary, why do it? Well I think that part of the answer to that lies in the way many cyclists are passionate, knowledgable and excited about the sport, not just the activity. Undoubtedly I am drawn to cycling because I love the physical challenge – that is what got me so excited about running. But I am also drawn to the way that seemingly so many cyclists are into the sport of cycling, not just the activity.

Certainly there will be many, many people who cycle for fitness and leisure and have no, or only very superficial, knowledge of the sport of cycling. The same is true of running. But today on the ride, the other members of the group I was with all had matching jerseys. I saw dozens and dozens of similar groups, all proudly sporting the same kit as one another. I don’t see groups of runners out on a Sunday long run, all wearing the same tops to identify them as a group.

I also loved the way that the group I was riding with talked about past and present athletes. They seemed to know their sport quite intimately. I wonder how many runners care about heroes of the road and track from the 1950s and 60s or in fact from any era in history?

In running as it is in cycling

So this is my fervent wish – I would love many more runners to get into the intellectual and spiritual side of the sport. It would be fantastic if  runners knew about the history of the sport and celebrated that. I would be over the moon if retailers used their intimate interaction with runners to educate them. I would love brands to spend far more of their time and the invaluable attention that they have, on what it means to be a runner and why running is such a fantastic sport. Of course, these fervent wishes are the basis of Freestak, where we spend all of our time telling brands about storytelling, and Like the Wind, where we try to reach more and more runners with stories about why we run, rather than how to run.

So here is to cycling – I hope that the sport of running looks at its two-wheeled cousins and decides to take a leaf out of its book.