The youngest, aged twelve, could not conceal her disappointment, and turned away, feeling as so many of us have felt when we discover that our idols are very ordinary men and women.

This quote is from Jo’s Boys by Louisa May Alcott, 1886. It is similar to the Hollywood adage that ‘you should never meet your heroes’. I suppose we have all experienced that crushing feeling of meeting someone that we have long admired and realising that they are nowhere near as inspiring or super-human (or even just personable) as we thought they would be.

But I am a natural optimist and I still believe that surrounding oneself with great people is a sure-fire way to feel positive, get inspired and learn. And if it turns out that your hero is a let-down then it is better to know and move on than live in blissful ignorance that someone you look up to is, in fact, not nearly as inspiring as you thought they were.

I was once at a theater in London. I can’t remember what I was seeing there. What I do know is that I was leaving early. As I made my way down to the lobby of the grand old Victorian theater, the doors on the ground floor opened and Rod Stewart appeared. He looked as though he was leaving too, overcoat in hand. Moments later the doors again opened and a woman appeared. Stewart turned to see who was also coming out and she said something along the lines of:

Rod, I am such a huge fan. Could I have your autograph, please?

This was a grown-up woman. Probably in her forties. Her eyes sparkled and a huge smile on her face told me that she was totally smitten by this pop-superstar. Stewart didn’t miss a beat as he pulled on his coat;

No! You can’t have an autograph

And he walked out of the theater to a car waiting in front. What a total fucking arsehole. This was a lobby completely empty aside from me, Stewart and a fan who had left her seat early to ask for an autograph. The look on her face was utterly terrible and I will never forget that moment. She looked completely crestfallen and I hoped that something terrible would happen to the saggy-faced dickhead who had made that woman feel so small. I wanted to console her but if she knew that I had witnessed her humiliation, it might have made her feel worse.

So when I had a chance to meet one of my heroes, I really hoped that he would be as amazing and inspiring as I believed he was. Well, my story has a very happy ending.

Why is David Hieatt one of my heroes? 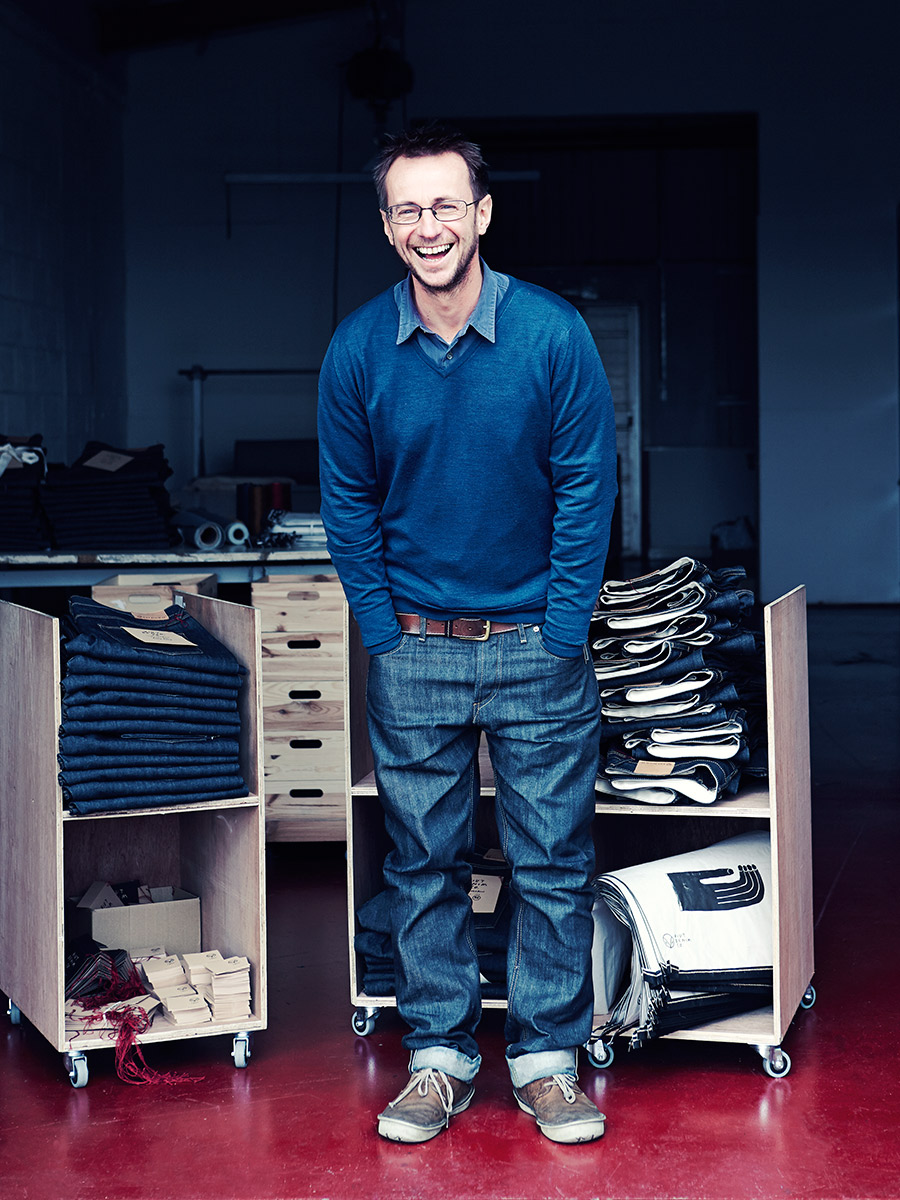 I have a few things in my life that I am fascinated by; building a business; photography (especially street photography); denim culture; running; cycling; independent publishing. David is involved in quite a few of them (and a whole lot more). And it appears that my fascination with what he makes and does is not unique. Last week David sent me a pair of Hiut jeans and when I posted about them on my social channels the comments came flooding in. Here’s a selection;

“Love this company. Have you seen their year books? I have every one. Obsessed”

“I’ve been coveting them for ages too”

“They have such a good setup … a back story”

“YESSSS! I met David a few years back. The project is so beautiful. Community / social minded AND great design”

Start at the beginning

I am not sure when I first came across David. Almost certainly it was when I found out about the Do Lectures. This is a series of events that started in a converted barn on a farm in south-west Wales. The idea, according to the website, is to;

bring the DO-ers of the world together – the movers and shakers, the disrupters and the change-makers – and ask them to tell their stories. Under star lit skies, in a bind with nature, they would inspire others to go out into the world and DO, too.

The Do Lectures started in 2008. At the time I was toiling away, working for a marketing agency. I was living from month-to-month, earning and spending too much. Happily I was also starting to find meaning through running. I ran 2:51:52 at the Berlin Marathon that year. I had no idea that there was a world beyond trying to climb the corporate ladder. I spent all the money I earned to offset the pain of having to go into work to do something pretty meaningless five days per week.

At some point I am pretty sure I saw a video about the Do Lectures. It looked amazing. I realised that the misgivings I had about my lifestyle were not unfounded. David and Clare, the team behind the Do Lectures, had assembled a great cast of speakers, many of whom suggested that there was another way.

Years before I stumbled into the intellectual clearing that the Do Lectures represented in the thick forest of obligation and stress that is work for most people, David had founded Howies with his wife Clare. They started the brand in 1995 and soon they were making waves as well as great clothes.

The Howies story is not all good. David subtly refers to that on the Hiut Denim website when he writes;

I learnt my lesson from the last company the importance of keeping control.

But I guess the problems that he experienced at one business are the foundations that are allowing David and his colleagues to build another business that is much stronger and resilient.

A few years ago, I started corresponding with David. It was the odd tweet initially. Then an email or two. I was voraciously consuming whatever I could that Hiut Denim and The Do Lectures were producing. There was a report called The Stress Report that I think everyone involved in building a business (not just the owner or senior managers but everyone concerned with the development) should read. I dreamed about the day that I could attend the Do Lectures in person (once Freestak and Like the Wind allow, I will be buying myself a ticket for sure!)

Then I had the chance to go to Bristol to speak at an adventure festival. In Bristol I was half way to Cardigan where David and Hiut Denim are based. I had the excuse that I wanted to visit a friend who also lives out that way – Chris (a great runner who works for a business taking visitors out into Cardigan Bay to meet the wildlife that lives there – check them out if you are ever in the area). So I contacted David and asked if he would be around. We agreed on meeting at Hiut HQ for a coffee on Sunday morning.

So that is how I found myself standing in front of a single storey unit on an industrial park on a cold Sunday morning, waiting for someone who from afar had inspired – and continues to inspire – me in my effort to build something.

Across the road from the home of Hiut Denim there were some sheep grazing in a field. Industrial parks in south-west Wales are not like those in north London where I live. I watched the animals work their way across the grass. Such a simple life.

I actually felt a bit overwhelmed at the time; by the struggles my wife and I are having trying to start a family. By the problems of running a business pivoting into a new area with huge promise, but not quite enough existing income to be comfortable. By my receding fitness and plummeting self-esteem. By the potential risk of driving over 100 miles to meet a man who might not be what I think he is.

The moment David pulled up in the car-park, I knew that meeting your heroes is the right thing to do. He had taken time away from his family on a Sunday morning to meet me – a complete stranger – and open up the Hiut Factory to make me a coffee.

Whilst he fired up the coffee machine (it is clearly an important part of the fixtures in the factory) David and I chatted without any awkwardness. David was interested in what we are doing at Freestak. Enthusiastic about Like the Wind. Understanding about the struggles. Encouraging about the future.

We talked about books we had read and loved. People we both admired. The greater purposes behind making jeans or connecting endurance sports brands and influencers.

All too soon we had finished our coffees and a tour of the factory. David offered to send me a pair of jeans (they are amazing – I am wearing them now as I write this). I gave him a set of Like the Wind from issue #2 to #10. We said that we would continue to stay in touch.

I had a few hours in the car driving back to London. Often I think that time in the car is completely wasted. I can’t send or read any messages. I can’t work on anything. But that Sunday afternoon was a perfect opportunity to reflect on what it means to meet people who have the power to inspire. There is a theory that each of us is the product of the people around us. Jim Rohn says that;

You are the average of the five people you spend the most time with.

Your heroes add to the equation. Pick them well because they will have an impact.