I had intended that I would publish one email a week for a year. I think the second email took me 10 days and since then I have been struggling to hit any sort of deadlines. Another thing to feel guilty about. But … I am still trying. And I think that is the key – just keep on going. I’m going to keep going and if I’m a bit late, so be it. But I’m going to carry on. I hope anyone reading these are enjoying them.

How long do you hang on? This is an interesting question. When one is involved in a business that is trying to do something very new and different, potential clients have a natural reluctance or scepticism. Selling the thing you are working on often requires selling the concept first and then the solution. Slow-old-process. For any business owner, the question becomes one of how long you think you can or indeed should hang on. Because it is very difficult to ascertain what is the expected slow-uptake and what is a problem of product-market fit (i.e. you have a brilliant idea that doesn’t solve anyone’s problem and therefore no one will ever buy it).

I’m an avid reader of business books, including some biographical ones – the kind that business people write when they have reached a point with their business that they can look back and say ‘this is how we did it’. The problem with those books, is that they often skim over the crappy bits. Admittedly it is not fun to forensically read about how close a business came to going under. But for anyone struggling to make an idea work, it is gratifying to know that businesses and leaders that you admire have had doubts and struggles. Knowing that success is almost always preceded by failure and disappointment encourages me to keep fighting. Steve Jobs probably says this best when he explains that creating something is really hard and requires you to do the hard things for a sustained period of time. So if you don’t love it, you won’t be able to keep going.

Nevertheless, it is a regular question in my mind; how long before the world starts to realise (in significant numbers) that they need what we do at Freestak? And can we survive long enough to reach that point? I don’t think for one moment that we have a product-market fit problem in the long term (for those that don’t know, Freestak connects brands with influencers and content creators in the running, cycling and outdoors sectors). The question is how long until the market realises. Answers on a postcard (or better still a social media post or blog post) …

Can I run for fun? I have posted a few times recently about the marathon-itch: the feeling that I am not quite done with marathon running. In the last couple of years it has been easy to push the thought to the back of my mind. I have not prioritised running over other things in my life – which is what I really think I need to do if I want to run to the absolute best of my ability. But in the past few weeks a couple of coincidences have made me think that perhaps I should run a marathon in 2018. The question is, can I commit to the training to run a time that would feel like I have been really stretched or should I just run for fun?

Le Col founder Yanto Barker cycles out of a trench and up a mountain. I met Yanto Barker – former professional cyclist, turned entrepreneur, a few months ago. I was lucky to be sat at a dinner on the same table as Yanto and then had the chance to meet him at his offices, from where he runs his cycling apparel brand Le Col. I am really impressed by Yanto; he is passionate, energetic, knowledgeable and clearly a determined and serious businessman. He’s also a very talented cyclist – as this video demonstrates.

In cycling there is a concept, known as Everesting – where a rider attempts to cycle up and down a hill until he or she has climbed the equivalent of the height of Mount Everest: 8,848m. But Yanto decided to take it to another level – he was going to attempt Trenching – climbing the equivalent of the depth of the Marianna Trench: 10,994 metres.

Is black and white the new… erm, black? Over the past few weeks I have started to shoot in black and white on my lovely Fuji X-Pro1. I don’t know what prompted me to make the change. But I have always loved black and white photography. I think that it focuses the mind – almost pushes the viewer to use their imagination a little. And I think monochrome focuses the viewer on the details, without colour to distract. And of course, the more I learn about photography, the more I admire the greats – Henri Cartier-Bresson, Gary Winogrand, Vivian Maier, Robert Capa, Robert Doisneau, Walker Evans, Elliott Erwitt, William Klein, Helen Levitt and others – and so many of these shot on film in black and white. So if I want to learn from the greats, I would like to try to shoot something like the greats. Of course, I have a very, very long way to go to being even a competent photographer. But perhaps by experimenting a bit, I can get better. Anyway, here is a photo I took in Milan on a recent work trip: 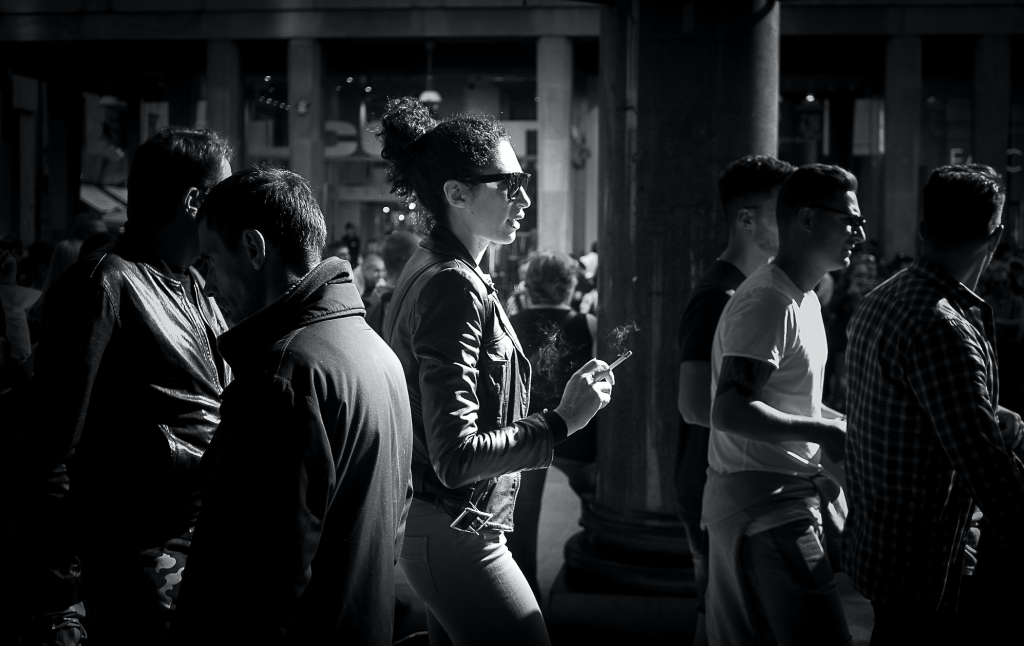 And One Other Thing

There are no maps. Great advice from Pascal Finette (AKA The Heretic). In his last email he wrote about the fact that when you are building something new, there are no maps. If there were, it wouldn’t be new.

My former boss and Mozilla’s then-CEO John Lilly kept telling folks that there are no maps. He prefaced every presentation with this warning – and the note that “your mileage will vary.”

I guess some people love that – the uncertainty of exploration. The task of making up a way forward on the fly. The lack of path to follow. Others hate it. But no one remembers the person who followed in the footsteps of the first person. Who climbed Mount Everest second? Who was the second person to find the source of the Amazon? Who followed Christopher Columbus, using his maps? No one remembers the people who followed. They remember the leaders. Because going first and doing something different is very, very difficult.

If you are interested in the philosophy of business, then The Heretic is a great read. I get a lot from his thinking and writing.

Cheering for Slomo. In the film I’ve posted a link to below, a man that everyone knows as Slomo might actually have found a way to live that we all can learn from. And it is linked – in his case – to roller-blading. I’m really struck by the idea that his theory explains why riding a bike feels so good. The same as surfing or skating or skiing. The power of effortless (or nearly effortless) acceleration on our brains. Is that why riding a bike for hours on end just feels like pure pleasure?

When Dr. John Kitchin, who is Slomo, says “The people that love Slomo are cheering for one person who got away. That escaped. And got to real freedom where he skates all day”. Perhaps there is a very important lesson in that for all of us.

SLOMO from Josh Izenberg on Vimeo.

The difficult second album blog post. Well, I have decided already that the first of my posts was…

The difficult second album blog post. Well, I have decided